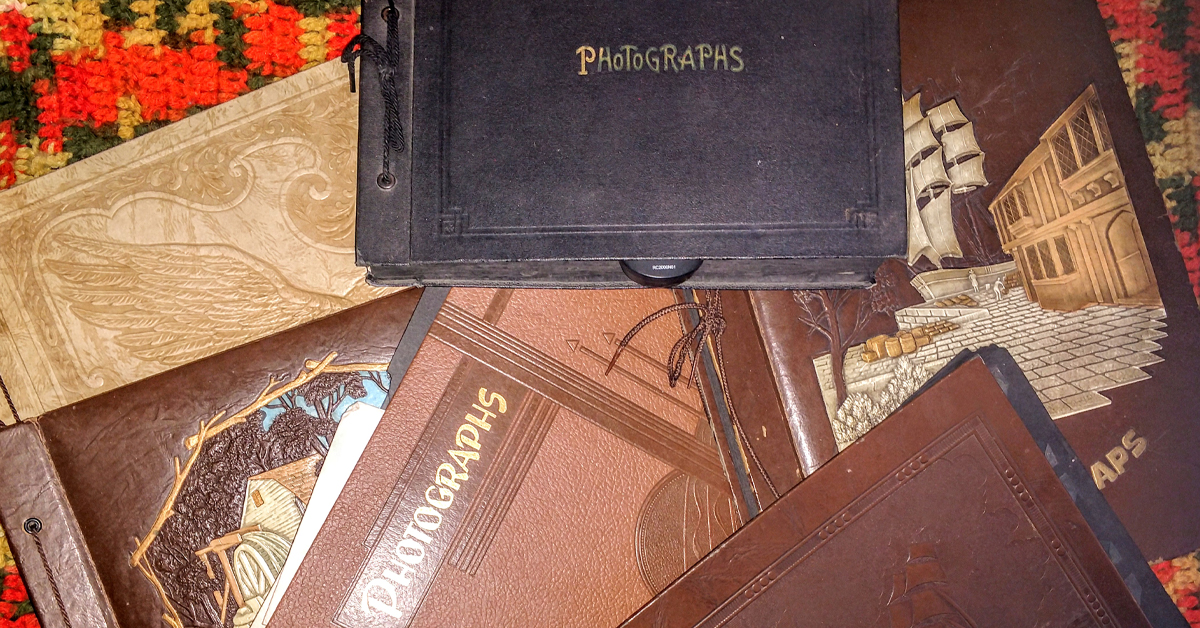 Interesting Discoveries and Surnames from Rescues


These two sisters are lovely! Faye Avenelle is on the right at 4 years old. Look at those shoes! She was born in 1917 and her sister on the left is Laureen Jewel at 10 years of age. That means the photo was taken around 1914 in the (what looks like) McColloch studio in McPherson Kansas.


What a beautiful old photo! I love the old grocery store in the background. On the back it states that it was taken on November 16, 1924. They were all dressed up and celebrating Mary Elizabeth (Hill) Giles Birthday. She is the lady to the left in the white dress. Her husband is to the far left of her and his name was Francis Marion Giles. I believe Mary was born November 16, 1857 In Indiana. The photo was developed in Bristow, Oklahoma.

Mary and her brother James or “Uncle Jim” Hill are sitting in the chairs in front. On the back it also states that James is from West Plains, Missouri. In the back are her two sons, Hugh Giles and Charlie Giles. This one is a little blurry, but if it was my family I would still be happy to have it.

Here is photo of Lawrence King and his parents Fannie and Fred. Photo developed in Bristow, Oklahoma. Bristow is on Old Route 66 and was home to the first radio station in the state of Oklahoma. It’s located in central creek County and known as “Woodland Queen” of the Creek Nation, Indian Territory. I looked around for some pictures online to see if they were standing in front of a building that might still be around or something to let me know what it was but I have not seen anything as of yet. I think there is an old train depot there, it would be cool to find out what it is. Maybe someone will see it and know.

These two Boys are Dressed up for Something!

These next two little boys are so cute all dressed up like maybe for Easter. On the back it states Robert and Donald Conley. This photo was developed in Oklahoma City, Oklahoma.

On the back of this one it states to cousin… and we will all have to try and make out the names on this one from the back. Maybe to Ralph from Addle or Addi. This will be very hard to say and there is no last names to use to try and confirm any of it. It is a beautiful photo though, she just looks sad.

The Mr J. Zweifel Photo studio of Dayton, Ohio is stamped on the photo which would age the photo to around the 1900’s. I also had to work to darken the writing to get it dark enough to read. 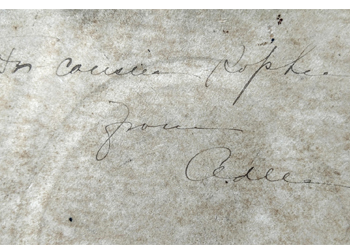 These two little ones are brother and sister I believe. The little girl on the right is marked “Mary Adams at 6 months of age – for Helen Maude”. The little boy is marked on the back with Jap Adams at 3 years old. No other information on these two beautiful photos. 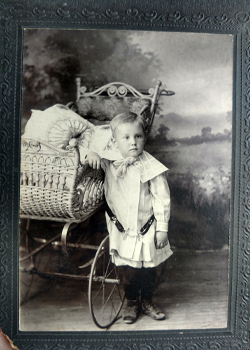 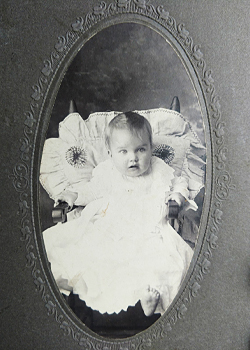 This little angel is possibly Evia Roward. If so she was born around 1867, and lived in Delaware. There is no other information on the photo, and this is how her name is wrote out on the back. Remember there are always mistakes when it comes to names. It could really be Eva and the person at the time just did not know how to spell it. Everyone spells names differently based on where they are from, or what their background is.

This is a handsome bunch of men! The back reads Bert, Curt, Bob, Bedford and Tommie Mullins. There is no other information, but I love the old car in the background.  Bedford is an uncommon name so we did a quick search for that name and found families in Tennessee and in Texas.   The most compelling match appears to be a family that lived in Pickett County Tennessee in 1900.  The U.S. Census lists a family with six sons and three daughters.  Bedford Mullins is four years old and born in 1895 in that 1900 census.   The brothers aren’t quite a perfect match, however one of the sons is named Elbert Mullins so that’s likely Bert.  There’s a “David C. Mulllins” who is listed as David Curtis Mullins in a public tree of this family on the Ancestry website.  There’s also a Joseph”Bob” Mullins” who also matches. Tommy is an unknown.   With a closer look it appears that the car in the background is an early 1950s Chrysler.  In fact the profile of the car and the grille appear to be a 1950 model or really close.  If we place the photo in the early 1950s then this is likely to be one of the last photos of Bert who is reported in that family tree to have passed away in 1953 at about 70 years of age.

Meet Mr Don Conner, this is a very small photo in a brown folding cover. It was almost faded completely away. I couldn’t find anything out about him, there are to many with the same name. There is another Don Conner out there that could be his great grandson! They look so much alike it is crazy.

This photos is marked April 1940, Oklahoma. The Halls, “The Grand Family”. I love their car!

These girls are absolutely gorgeous, It is a post card, and with no names or writing on the back it would be very hard to track down. But, one hint is the two sisters, and the other is it was taken in the Larson Studio in Wichita, Kansas. Another possibility could be that it is three sisters because the older girl is not wearing a wedding band. If you are thinking it would be impossible, you are wrong. If the right person happens to see it and recognizes the family from photos around the same age, it is totally possible. 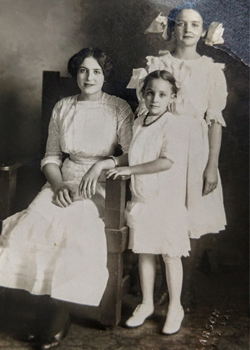 
This family photo has the name Jeannie H. Crase on the back. It also has a sticker with a complete address for a house in Hemet, California. It appears she could have been born in 1915 or 1916. One person with the same name was born in California, but both had lived there so it could be to either family or to a totally different one all together.

Anytime I am out looking at the antique stores for old photos and I find one of interest. I always look for things that would connect some of the photos. Especially if all the photos are just tossed in a box or a basket. Which is the case most of the time! So, in this case this black and white has the same sticker on the back of the photo. It could be the same man, just older or it could be a son. Based on so many of the photos that I have studied I will go with it being the same man. Maybe with the two of them together it will help someone. I have not gone antique digging in California so these photos made their way somewhere to the center of the United States somehow.

Wow, once I got this one on the computer I could see a studio mark right above where Cecil Jr. is written. I could not see it on the photo at all and could not feel it. I believe it says Main Studio, Oklahoma City, Oklahoma. On the back of the photo is written “Cecil J. Earlywine Jr. at 18 months” of age.

Another cutie here with no writing on the back at all. But babies are so cute! 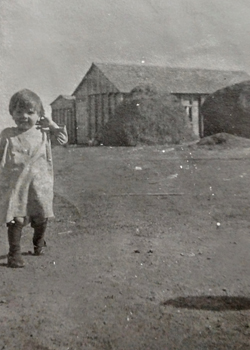 This little girl looks like she is in front of a few barns. It sure is sandy looking. Nothing growing, and when you look at the Photo with a magnifying glass those are not trees by the barn. It looks like a crop of something that has been harvested and piled up to use for feed for a cow or some pigs maybe. Her name is all that is on the back but I think this one will possible be from back during the dust bowl. Many little girls with the same name, maybe someone will recognize something.

This old photo is in a candy box filled with paperwork and a few photos. This is the oldest photo in the box! It is in really bad shape, but I worked with it a little so some of the image could be seen. John or who ever the box belonged to has a birth certificate in the box as well as a ticket on a ship for a trip from England to Australia. There is more on this family and items in another article. Maybe someone will recognize something and be able to put some pieces to their family puzzle together.

LaRae, she has some awesome pearls on!

At the top of this photo is written Lucille LaRae. The stamp on the bottom of the photo is The Wears of Sherman, Texas. On the back of the photo it states grew up in White?, was married in 1934 and moved to Slaton, Texas. Her husband was a superintendent of a school in Austin, Texas. Written on the bottom is had a son named Lucian.